7 COMMON TYPES OF EATING DISORDERS, THEIR SYMPTOMS AND HOW TO DEAL WITH THEM 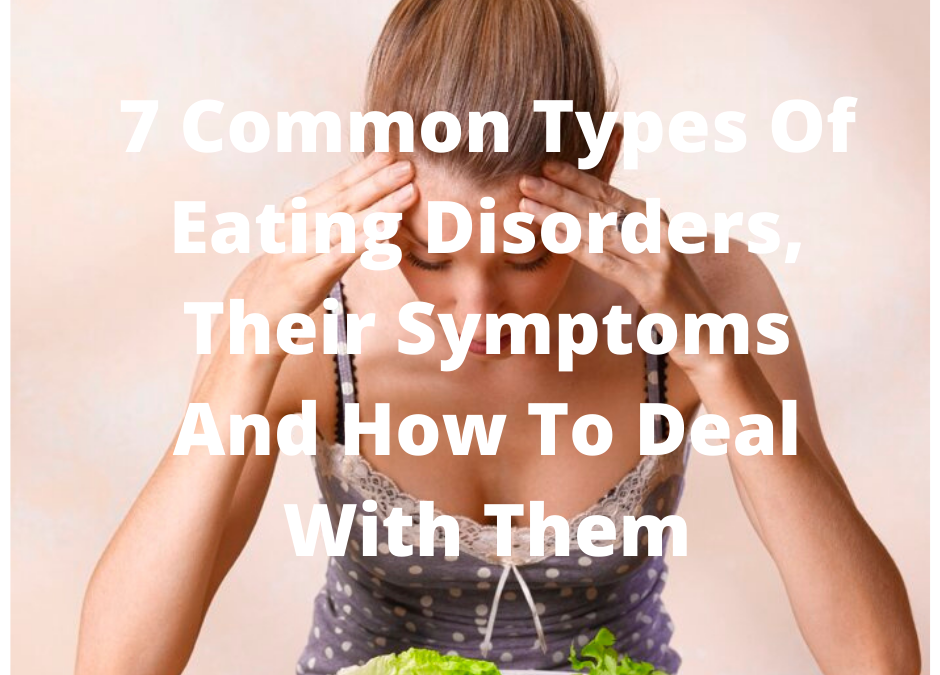 Eating disorders are more common than many expect and affect not only the person who is struggling with it but also their family and friends. The underlying causes are varied and affect people differently across demographics, but the damage to the body is similar and shares marked changes across different types of eating disorders. It is also important to know the difference between disordered eating vs eating disorder.

How do I know if I Have an Eating Disorder?

If you are worried about having an eating disorder, the first thing to address is that you have considered it in the first place. This may be a sign that you need to address the habits surrounding your eating whether it is an eating disorder or just the beginning of the path towards one. Some of the symptoms that are common among these concerns include excessive control over food, feeling bad about your body, exercising to excess, avoiding eating in public or when you can be observed by others, development of fine downy hair across the body, dehydration, and maintaining rituals around eating. Other symptoms are more specific and occur with a specific eating disorder. This is not to be confused with disordered eating- which is a phrase that is used to describe eating rather than a diagnosis.

Where an eating disorder is not present there may still be disordered eating. This includes yo-yo dieting, eating compulsively or in extremely controlled ways, emotional eating, and eating in secret. It may be as simple as ignoring cues of when you are hungry or when you are full, or feelings of embarrassment, shame, or fear that are situated around food.

This leads to eating significantly limited calories and often is seen through calorie counting, skipped meals, and exercising excessively, or using pills or other methods to reduce weight. Symptoms will include those that reflect starvation throughout the body, and it is often accompanied by distorted views of current weight. Both anorexia in men and anorexia in women will lead to weight loss and can lead to starvation of the body and a lack of needed nutrients.

Characterised by an obsession about weight and body shape, binging on foods then purging the calories, and often restricting calories drastically then binging later which resets the cycle. Often people with Bulimia will be regular weight or even overweight, rather than being underweight.

Rumination disorder results in food that is regurgitated either intentionally or not, frequently. It can lead to malnutrition as the necessary foods are not consumed and retained.

Food avoidance can be for many reasons such as the texture and temperature of the food, the colours of the food, or how it smells or tastes when cooking and eating. Most often this is not related to avoiding foods to limit calories intentionally but rather because it is not appetizing or there is no interest in foods.

Just as binge eating without purging has its own diagnosis, so does purging without binging. This occurs with regular food intakes and can involve laxatives, diet pills, forced vomiting, and excessive exercise without limiting food consumption or calories.

When there is eating that occurs at night, waking during sleep to eat, and eating excessively in the evening after supper has been completed, it is called night eating syndrome. This has no relation to other health concerns and the eating is remembered rather than being eating without knowledge, and it can be difficult to find the cause and solution.

Other eating concerns that do not fit into any of the above categories are considered to be Unspecified Feeding or Eating Disorder and may be labelled as such when there is not enough information to consider one of the other disorders, or if it simply doesn’t fit any of them.

Steps to Take Where an Eating Disorder is Present

Once it has been determined, or there are concerns, that an eating disorder is present it is important to address it and seek treatment. Whether it is for yourself, a loved one, or a friend, there should be no shame or guilt around this as it is not something the people choose, rather empathy and understanding. Treatment can be obtained from a family physician, and they can make the original diagnosis as well. They will complete a physical exam and check the overall health of the body, and a psychological evaluation may be completed to determine the extent as well as potential causes, which can lead to better treatments.

Treatments will be a combination of methods from a family doctor, dietitian or nutritionist, therapy, medication, and in some cases a hospital stay to address immediate health concerns. Both mental and physical health will be addressed, and treatment will be personalized for each individual to fit their needs. If causes are related to anxiety, depression, OCD, or other concerns medication may be prescribed to help manage these, which will allow the eating to become more regular and comfortable.

Whether you require additional support with your treatment plan, or you feel you have issues around eating even without a diagnosis, my coaching support can help. I offer support without judgement and understand the ups and downs that come from this journey. Contact me to see how I can support you in overcoming issues around eating and body image.

While eating disorders affect the family and friends of a person, those same people can provide support and encouragement without adding pressure, and this can be the key to overcoming eating concerns and issues around eating. It is recommended that stress and anxiety be controlled and reduced, that there is no self-weighing occurring, use the support groups or people who are available, and remain active in caring for the self. Some will find that yoga, meditation, massage, choosing a new hobby or reviving a previous activity that you were passionate about can help to address stress, lessening the pressures felt and allowing for recovery and rest.